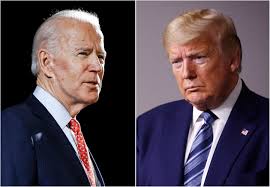 As the path to victory narrows for Trump and widens for Biden, the reality that the end of an era is upon us is dawning on so many including members of the Trump campaign. Reports show that many campaign operatives are beginning to come to terms with the voice of the voters and the imminent outcome that relieves them of their current jobs. Reports also say that many have started making calls, to find their next opportunity, some obviously relieved to start the challenging task of remaking themselves. https://apps.npr.org/elections20-interactive/#/president

As of now, the tally is as follows

On other outlets like CNN and NBC, Mr Biden holds 253 Electoral votes

As counting continues in Pennsylvania, Nevada, Arizona, the consensus is that the votes are breaking favorably for Mr. Biden, with Philadelphia giving him a record 9:1 win and other areas like Clark county in Nevada giving him a 2:1 win over Trump.https://www.cnbc.com/2020/11/05/election-live-results-updates-trump-biden.html

In the past 24 hours we have heard Mr. Biden sound presidential, urging patience and imploring Americans to start coming together and to put away the animosity. Mr Biden in his speech on Wednesday November 4, told Americans that while he is coming to the presidency on the platform of the democratic party, he will govern on a one-America focused platform as the job demands. https://www.cnn.com/videos/politics/2020/11/04/joe-biden-speaks-votes-being-counted-2020-election-elexnight-sot-vpx.cnn

Mr Biden’s message is resonating with people all over the country regardless of party, many in states like Maryland, Pennsylvania, Georgia, Minnesota, California, Kansas, Nevada say they are anxious to hear the announcement of the winner. They want to know who will be at the helm in the United States of America for the next four years. As one woman put it, “we are ready for a move forward, let’s get a name and begin to converge the conversation around him. Once the people speak, we should all welcome that person”. Another said, “I hope it’s a real effort to welcome and work with the new president, because I believe we will have a different president-elect. I hope for the John McCain welcome not the Mitch McConnell welcome”. The person of course alluding to the comment ascribed to Speaker McConnell on a failed vow to make President Obama a one-term president, in contrast to Mr McCain’s offer to support President Obama’s presidency as an American democratic responsibility. https://www.nbcnews.com/politics/2020-election/some-republicans-break-trump-say-take-time-count-all-votes-n1246420

As we file this story, the race to the White House is still on, America waits, but as the days turn into hours and eventually minutes, most Americans are converging on a change of guards, the leader of whom they believe will be Mr. Biden or Joe as some call him. https://www.businessinsider.com/mitch-mcconnell-expects-trump-lose-us-election-economist-stimulus-2020-10

https://www.divephotoguide.com/user/buycialisonline - It is nearly the Tipping Point or is it? Trump – lame duck –

tadalafil 20mg https://www.divephotoguide.com/user/buycialisonline Regards. Quite a lot of postings!